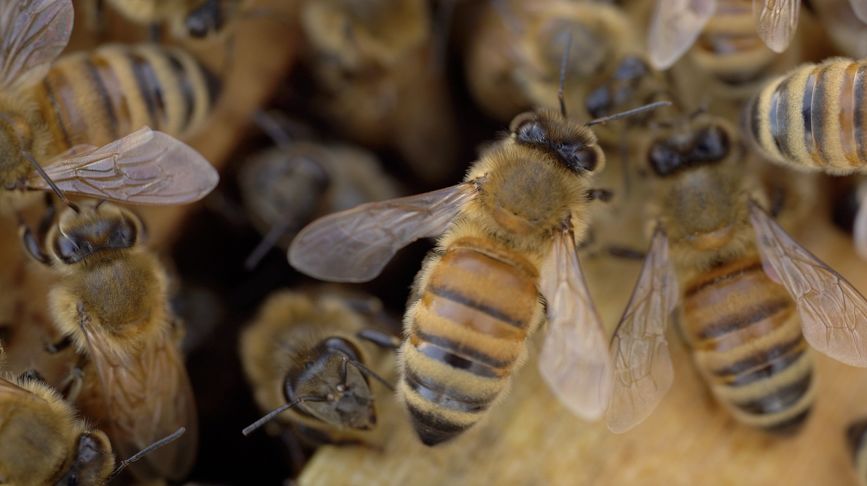 Know Your Queen and Why She’s Important

In some ways, the queen bee is a lot like human royalty. Selected before birth, she is treated differently from the beginning and spends her life being waited on by her worker bees.

In other ways, the life of a queen bee is far less glamorous than that of a human royal. Her life starts with a fight to the death and a frenzy of mating, then she spends the rest of her life inside the hive laying thousands upon thousands of eggs.

Here’s your guide to the lifecycle of a queen bee:

The first day on the job

Roughly one week after she comes out of her queen cup and kills her rivals, the new queen will take flight. She leaves the colony with one thing on her mind: mating.

The queen will hover in an area that will attract males (drones) from other colonies, to avoid inbreeding in the next generation. During her flight, she will mate with between 10-20 drones, with many other potential suitors failing to mate. The unsuccessful drones will return to their hive and die a few months later.

The drones that succeed in mating with the queen are much less fortunate. The endophallus (sex organ) of the drone enters the queen, and as he pulls away it is torn from his abdomen. This results in the drone dying rather quickly — mating is his one mission in life.

After two or three of these flights, the queen has enough sperm (around 6 million!) to last her lifetime. She stores them inside her oviducts, which she can access whenever she needs to.

When the queen has got everything she needs from the mating drones, she returns to her hive, never to leave again — unless she needs to swarm if the colony becomes overpopulated. In the hive, she feasts like a true queen, eating a diet of royal jelly and honey. While it seems like a lavish lifestyle, a large chunk of her time is spent laying eggs. Every single day of her healthy life, the queen lays up to 1500 eggs – a whopping 200,000 per year from one queen.

Worker bees spend their time working for the queen. They feed her, clean up her waste and make sure her hormones are spread evenly around the hive so there is no risk of generating new queen cells.

The queen takes care of demand and supply

When the queen stores the drone sperm from her mating flights, she has everything she needs to populate the colony on her own. If the colony requires more male drones, she can lay unfertilised eggs which will guarantee male bees. If the colony needs more female worker bees for collecting honey and maintaining the hive, the queen can access the stored sperm to fertilise eggs and create worker bees. She lays the fertilised eggs and out pop females once they have developed in their cells.

The queen lays her eggs in hexagonal cells built by the worker bees – the classic ‘honeycomb’ structure. Once hatched, worker bees are fed royal jelly for two days, while future queens eat it for the entire time they are larvae. Drones require 24 days to develop, workers need 21 days and queens only need 16 days.

All good things come to an end

Around five years after hatching, the queen bee is ready to retire. Worker bees will see the signs of decline and build several egg cells specially made to grow future queens. These cells hang vertically and are known as queen cups. The existing queen lays fertilised eggs in the cells, nurse bees feed them their special diet, and voila, new queens emerge to fight for their rightful place in the colony.

While her lifestyle may not be as prim and proper as her name suggests, a strong queen is vital to every colony. The queen ensures that the balance of male to female bees is maintained and that the work outside and in the colony marches on. She’s a smart bee with a tough job.

To learn more about queen bees and how a new queen is introduced, read ‘New queen for the old colony’.

Just a reminder our last day for business is Thursday December the 24th, closing at midday. Our Auckland office will be open the 29th, 30th and 31st of December. Our Christchurch office is back open on 5th of January. Merry Christmas from The Team at Ecrotek!