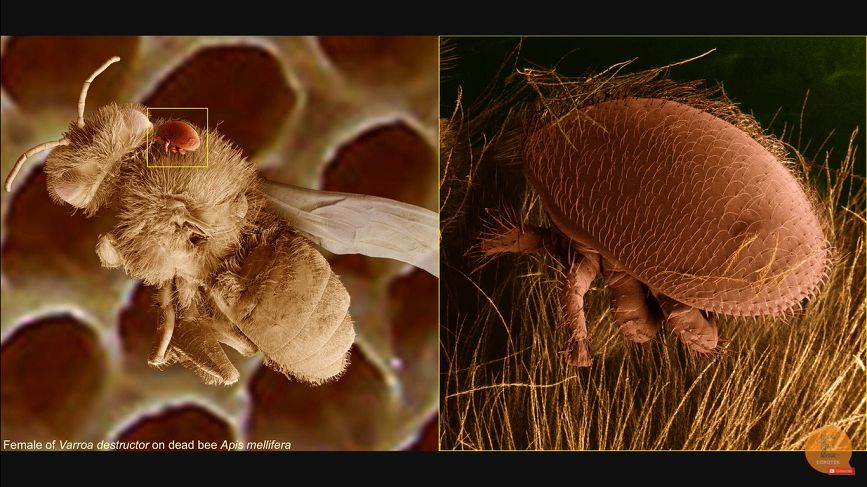 Varroa mites (Varroa destructor and V. jacobsoni) are external parasites of honeybees. They feed, live and reproduce on adult honeybees, larvae and pupae. All hives in NZ have Varroa, and if you don’t treat yours, they will die.

To assist beekeepers dealing with Varroa, Ecrotek produced three short videos on how to spot and treat the parasites.

In the first video, internationally renowned honeybee scientist Dr Mark Goodwin talks about the importance of checking for Varroa that might be resistant to miticides. In the second and third videos, Ecrotek research associate Sarah Cross explains how to check for Varroa using the alcohol wash or icing sugar methods.

Jump ahead to see the videos, or read on to learn how to deal with Varroa.

Signs of Varroa in hives

If your colony is weak and isn’t consuming sugar syrup, it could be a sign of Varroa. Here are some common symptoms to look for:

You can treat your colonies for Varroa if you find these symptoms, but if you don’t get them in time, you can’t be sure they will survive. When Varroa first came to New Zealand, all the treatments were effective, and we didn’t need to check to ensure they worked. Now, many Varroa mites are resistant to treatments – which could be detrimental to your hives and your business. Every hive where the treatment hasn’t worked is a hive that won’t produce any honey for you next year.

The best prevention of Varroa is regularly checking your hives, treating them promptly and always testing after treatment to ensure it worked. It may seem like a lot of effort to test each hive after treatment, but it could save your bees. But if you want to get an in-depth look at the levels in your hive, you can monitor the Varroa using an alcohol or icing sugar shake. That will tell you how many Varroa mites per bee are in your hive. Varroa mites mainly live under brood cappings. To check for them, take a frame from the centre with lots of capped brood. You need to be 100% sure that the queen is not on your frame, so you don’t kill her. A lot of the bees probably have Varroa on them, but you can’t see them so you need to monitor them.

Here’s how to do that using the alcohol wash method:

1. Choose a frame with lots of brood. 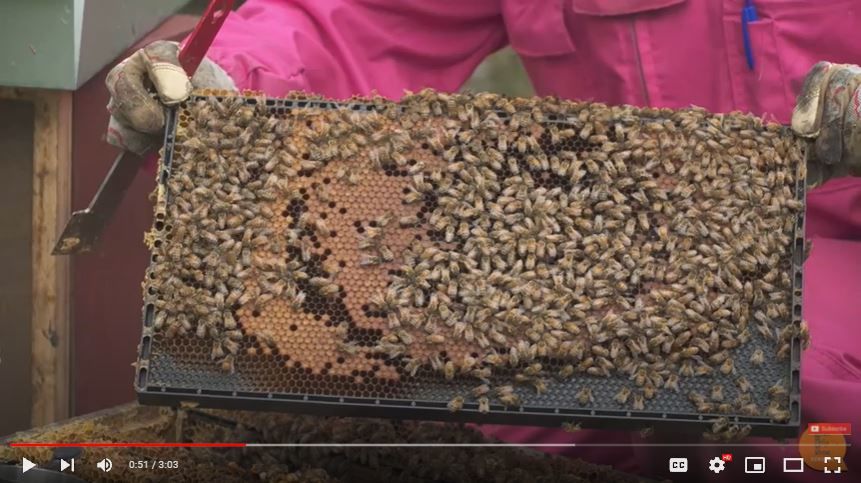 2. Shake bees off the frame into a tray. 3. Collect half a cup of bees (about 300 bees) and place into a Varroa Easy Check alcohol wash sampling container with a tight lid. 4. Pour methylated spirits into your container. Sadly, the bees will die – but so will the Varroa, and this is a better solution than the entire hive dying. 5. Shake the container so the Varroa dislodge and fall to the bottom. 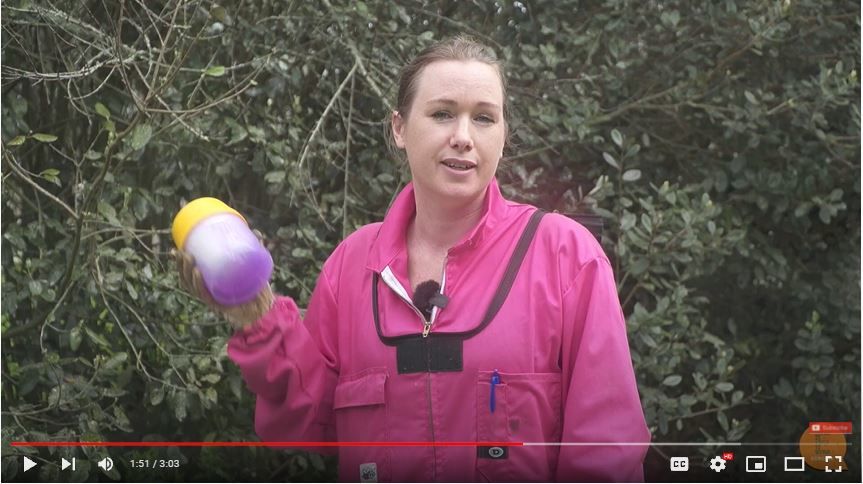 6. Count the Varroa at the bottom of the varroa alcohol wash checking jar. 7. Make sure you know exactly what Varroa looks like, to be sure you are counting correctly - the number of mites you count gives you an estimate mite load per 300 bees. Here’s how to carry out the icing sugar inspection:

1. Choose a frame with lots of brood. 2. Shake bees off the frame and onto a tray 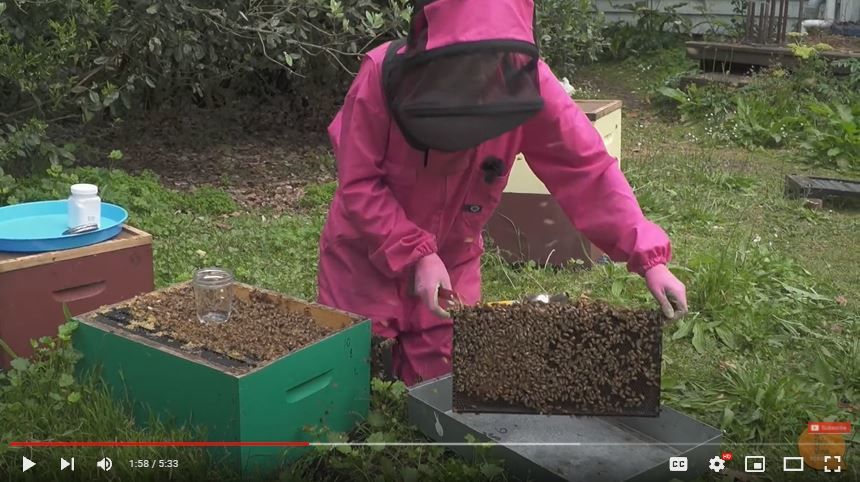 3. Collect half a cup of bees (about 300 bees) and place into a sampling container. 4. Put a scoop of icing sugar into the jar, and push it through the mesh to the bees. 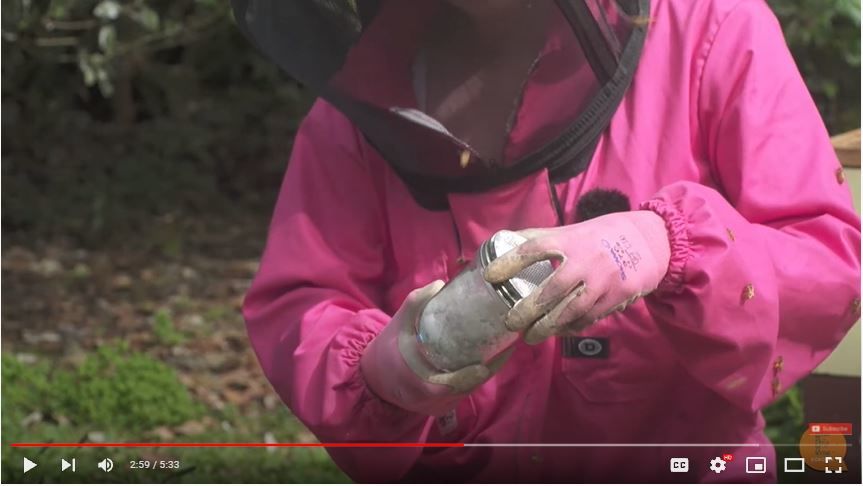 6. Shake the icing sugar through the mesh and onto a light-coloured tray. You need to shake quite hard for about one minute, so the icing sugar falls out along with any Varroa. In either the alcohol wash or icing sugar test, you’ll need to treat your hives if you find high numbers of Varroa. If the number is quite low and there are only a couple of Varroa per 300 bees, you should be safe to leave it for the time being, as long as you check the level in a few weeks.

If you ignore Varroa and the level gets very high, it’s sometimes too late to save the bees – even with treatment. That’s why it’s best to treat Varroa when the level is low to medium. If you don’t monitor your Varroa levels at all, you may get a bad infection and your whole hive will die.

Varroa is a very common problem in New Zealand beekeeping. All hives have Varroa and if left untreated, your bees will die. You can check for Varroa by either the icing sugar test or the alcohol wash method, and make varroa treatment decisions based on your findings. Because some mites have become resistant to miticides in recent years, the absolute key to keeping your numbers down is regular inspections – even after treatment – to keep Varroa at bay, and always rotate your treatments between Bayvarol and Apitraz every Spring and Autumn. You can buy your Varroa Treatment products online from Ecrotek today and enjoy fast shipping NZ wide.

Want more tips on how to keep your hives thriving and healthy? Ecrotek’s blog is filled with helpful tools for beekeepers, whether you’re a veteran or just starting. Check them out here.